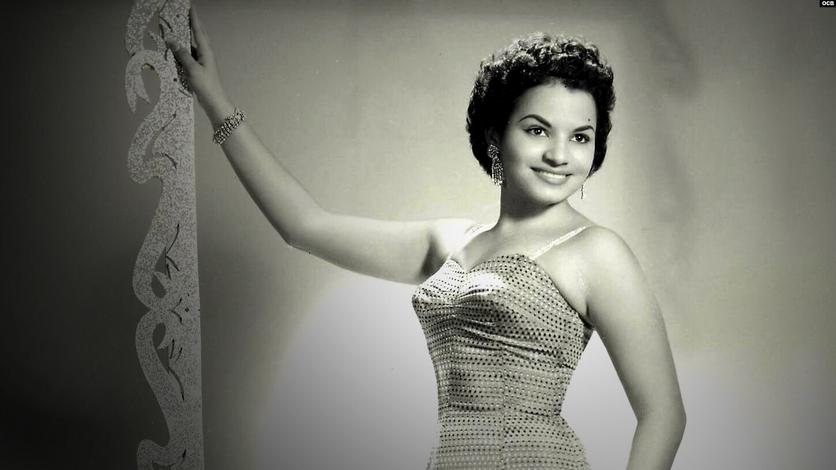 Blanca Rosa Gil was born in a small village called Perico in Matanzas, Cuba on August 26, 1937. She was the youngest child of 10, born in a small home on Fresneda Number 2. Shortly afterwards the family moves to a neighborhood in Havana called El Narajito. She grew up in a musical family and nearly everybody in the home sang well. Her father was a tenor and her mother a mezzo-soprano. Of the 10 children, all but the three oldest boys sang. As Gil would later joke that her oldest brothers “Francisco, Reglo and Roberto couldn’t even sing in the shower. All the other children were blessed by God with beautiful voices.” Her brother Pedro was the first to sing publicly as he would sing with the local big band in town called Orquesta Casino Deportivo in Perico. By age five, Blanca Rosa was the center of attraction in the family since she would readily perform and sing for anybody that would listen. Later on, she and her two sisters, Rita and Mercedes started performing at school events. Both Rita and Mercedes would later have careers as singers, although not at the international level of Blanca Rosa. Rita performed frequently in Havana, Cuba and Mercedes in Miami, Florida.

Gil’s had family that lived in Caracas, Venezuela and they would frequently visit Cuba. Her cousin Katy Rentería had acquired some fame as a dancer of the Ballet Folklórico de Venezuela   (Venezuelan folkloric ballet company). Her cousin Katy asked Gil’s parents if they would allow Blanca Rosa to accompany her and her parents on tour because she was very lonely. Gil’s parents conceded and at 15 years of age, Blanca Rosa was on her way to Caracas with her relatives. Her first aeroplane trip terrified her (which may have kept her from returning to Cuba sooner). Within a month or so of being in Caracas, her cousin Katy celebrates her birthday with a party that included several entertainment personalities among its invited guest. Arístides Borrego, a television entrepreneur, overheard Gil singing in the kitchen while she was making sandwiches for the guest. He immediately asked who she was and would she be willing to sing on television. When he was told that she was a minor he then responded that he had a children’s program she could perform in called Humo y Fantasia (Smoke and Fantasy). With her cousin Katy’s reassurance, Gil agreed. They set a date at this time when she can go for a studio test at Televisa studio. They asked her to pick whichever song she wanted to sing so Gil asked the pianist if he could play “Reloj” by Roberto Cantoral. Due to her performance on the test, Gil is scheduled to perform on the television show and unbeknownst to the 15-year-old, her career was launched.

Within a couple of years, around the time she became 17-18 years old, she started singing at the Plaza Cabaret, a popular nightclub in Caracas. One night, Gaspar Pumarejo, a well-known Cuban producer and one of the founders of Cuban television, had been visiting Venezuela and happened to be at the nightclub on the night that Gil was performing. He was very impressed by the singing ability of this young woman. When he was told that she was Cuban he immediately requested that she come to speak with him after her set. He thought it was odd that such a talented Cuban singer would be an unknown in her own country. On his insistence, she agrees to return to Cuba.

Pumarejo returns to Cuba and within a short period of time sends Gil a plane ticket so she can return to her native country. Blanca Rosa Gil arrives in Havana, Cuba in 1957 and soon signs a contract with Pumarejo. Immediately he starts scheduling her to perform on radio and television shows. He had her billed as “Blanca Rosa Gil – La muñequita que canta”, the “the little dolly that sings”, a reference to her young age and her diminutive size. It was common to see her on television and then, later on, hear her on the radio show “Show de las 7p.m.” broadcast by Radio Progreso. She made appearances and sang in all the popular television shows in Cuba: Casino de la Alegría, Jueves de Partagás, Show de Shows and El Show de Alfonso Arau, all broadcast by  CMQ Televisión.  She soon became a staple at the Alí Bar, the most popular cabaret at the time that happened to be owned by her brother-in-law, Alipio García.

Records for Modiner and Rosy label

Her first single, "Romance Azul" with "Qué se yo" on the “B” side was recorded with the Osvaldo Estívil Orchestra for the Panart label. In 1959, Nilo Gómez, the founder of the newly established Modiner label, established a reputation in a short period of time for taking a chance on recording the young voices that were establishing themselves on the Cuban cabaret scene. Gil soon followed with a second single “Ya no estás” with “No me vendo” on the “B” side recorded with the Moisés Alfonso Orchestra for the Modiner label. These first two singles did not generate much excitement despite her rising popularity on the nightclub stage. Her third single, “Sombras” made her a nationwide sensation. Gil frequently liked the lyrics of songs originally composed for different styles and tempos, namely tangos. Blanca Rosa often liked the lyrics of songs originally composed for different styles, such as tangos. Since the fifties, it was common for bolero singers to sing tangos in bolero time. Gil would select songs that she liked lyrically and with the help of the orchestra leader would adapt the song to a “bolero” style. Her first hit “Sombras” was originally a Colombian "pasillo" by Carlos Brito and Rosario Sansores. On both “Sombras” and the flip side “Besos de fuego” she was accompanied by the Severino Ramos Orchestra. In the past decade, jukeboxes (automated victrolas) had started to become very popular on the island of Cuba. It has been frequently reported that Gil benefited greatly from the exposure provided by these machines that played 45rpm recordings. Gil recorded a total of six singles on the Modiner label (12 songs including the “B” side). By the end of 1959, the label compiled them into a 33 1/2 rpm LP titled Canta: Sombras, Modiner 1002. Gil quickly recorded enough material for a second LP but only 3 singles were released before the island of Cuba fell under communist leadership and everything stopped abruptly. The 3 singles released, "Cristal", "Pero vete lejos" y "Una tarde cualquiera" were huge hits for the singer in late 1960. Many of these songs had been sung by others prior with little success. There is no doubt that Severinos Ramos' arrangements that were heavy on the solo horn intros, were perfectly suited for Blanca Rosa's dramatic vocal style. She sang these emotionally charged lines with perfect diction and her delivery was punctuated with attitude.  Although it was obvious that the already established Olga Guillot was an influence, Gil pushed the drama even further. She was the new torch singer in the neighborhood and her stage presence and delivery were just perfect for the romance-filled tropical nightclub scene.

Gil was not in favor of the revolutionary changes taking place in Cuba under Fidel Castro and with the excuse of a pending Mexican tour, she fled to her country with the master copies for her soon to be released second album. It is believed that LP covers had already been printed in Cuba for the release of the second album under the Rosy label but it is not clear if any actual vinyl was ever pressed on the island. On the initial pressings in Mexico the album was called Blanca Rosa Gil - La muñequita que canta, CI-1019, under the Cisne/Rosy label. The single “Cristal” was number one on the Venezuelan Hit Parade for 5 months. She was awarded 3 gold discs for her singles “Sombras” and “Cristal” and was considered the best ballad singer in Cuba for the year 1961. Future reprints of the LP have been retitled Cristal but the title "La muñequita que canta" would still continue to appear somewhere on the cover.


In Mexico for 2 years
In Mexico, Gil soon starts to record with the Memo Salamanca Orchestra for the Peerless record label and soon had another single in 1962 with “Aquel Rosario Blanco” which cements her popularity within the Mexican public. The song had previously been released in Cuba by Amelita Frades. Eventually, all her singles on the Peerless label were compiled into an LP of the same name, Aquel Rosario Blanco, LD-698. With her recent successes in Mexico, Venezuela, Columbia, Puerto Rico and Miami, Gil continued to record and perform al throughout central and south America and Mexico. For her next album Bajo las Luces de México for the ECO label No. 208 (a subsidiary of the Peerless label), she again uses the Memo Salamanca Orchestra with some tracks recorded with the Sergio Pérez Orchestra. During her brief years in Mexico, she received several propositions to appear in movies but never appeared to show a significant interest in acting.

Moves to Miami, Florida for 9 years

Recording for the Velvet

Gil would remain in Miami for nearly a decade and during most of that time, she recorded exclusively for the record label Velvet. During her tenure on the label, she recorded 12 LPs for the label and used the Porfi Jimenez Orchestra for most of those recordings.  Her first two albums for the Velvet label, La Cancionera Internacional (Velvet 1302), Voz y Estilo de La Única... (Velvet 1317), produced modest radio hits but the title track of her third album for the label, Hambre (Velvet 1332) produced a huge international hit in 1966. The second single release from the album, “Amor Gitano (Mal Pago)”, further continued the momentum of the album.

It is at this time that the singer decided to create her own record label called Benson. Her next four albums would be recorded under this label: Maestra de Maestra...!(BLP-1256), La Grande de América (BLP-1257), Vete Ya (BLP-1258) and La Doña (BLP-1259). It is around this time that Gil, now divorced from her first husband, marries Antonio Figueroa. Figueroa was a Puerto Rican who had started the Blanca Rosa Gil Fan Club in Puerto Rico several years earlier. He then later meets the singer and eventually starts working for her.  The professional relationship led to a romantic attraction that ended in marriage in 1972.

In 1974 she recorded one release on the Fania/International label, Punto Final… Y Hacia Adelante (Fania/international 451) and Sigo Siendo Reina (LOBO 1003) on the Lobo label in 1976.

Retires then returns to the popular stage

In 1979, she released a self-titled album, Blanca Rosa Gil, on the Liznel label (Liznel 1389). This would be the last album she would record before deciding to retire from the music profession and dedicate the rest of her life to religious faith. She vowed only to sing from that time forward for the glory of God. Nearly two decades after being in retirement, she was asked to participate in a fundraiser for her friend Blanquita Amaro, another Cuban celebrity. She was torn on whether to return to the stage or not even if it was for a good cause. She stated in an interview that she prayed to God for a sign that would let her know that she had his blessings. She did return to the stage for that event and performed a few more times throughout the coming years in Miami and Puerto Rico. She eventually released her last album to date in 2009, Ayer y Hoy. She was accompanied on this album by a quartet of musicians, Los Montemar.